Several different nutritional components of the Immunotec Sports Supplements contribute to increasing muscle strength. We will focus on two — glutathione enhancement and provision of the amino acids required for optimal muscle function. Immunocal and Immunocal Platinum will supply ample amounts of both.

Immunocal and Immunocal Platinum give your body the building blocks (precursors) for your cells to manufacture its own glutathione. This small protein (peptide) plays a number of critical roles in your body, which are covered in more depth here.

Immunocal and Immunocal Platinum also supply all the essential amino acids needed in human metabolism. Several objective measurements are used in food science to describe the importance of any specific protein to our body: BV (Biological Value), PER (Protein Efficiency Ratio) among others. You will be hard pressed to find any other protein with a higher value than Immunocal’s protein isolates.

In addition, Immunocal and Immunocal Platinum will deliver amino acids that have been the focus of muscle development in numerous studies. These include the important BCAA’s (Branch-Chained Amino Acids) leucine, isoleucine and valine.

In a ground-breaking clinical study, Immunocal was given to young healthy adults at the beginning of a summer and compared to a placebo protein (caseine). After three months these subjects were retested for muscle strength and endurance and a profound increase of between 10 and 15% was demonstrated. See the results below. 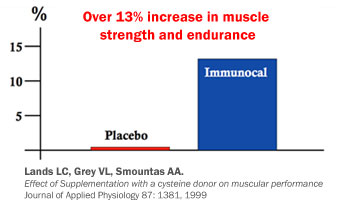