Understanding the Science Behind Immunocal 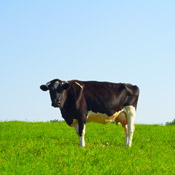 No beef actually, but you got the right animal – Immunocal comes from cows! In fact, it takes about 125 gallons of fresh raw milk to make a pound of Immunocal. What eventually ends up passing your lips is a derivative of whey protein isolate especially engineered to have the highest amounts of glutathione precursors possible. Before talking about what glutathione is, and what it does, let’s look at some of the benefits of taking Immunocal, besides its clinically-proven ability to raise glutathione.

As many of you are aware, whey protein, especially whey protein isolates (over 90% protein), supply most of what we need for muscle mass generation. It is sometimes referred to as the “perfect” protein, because it contains all the essential amino acids required for your body’s protein synthesis. With a biological value (BV) of over 110, it would be challenging to find a protein utilized more efficiently than Immunocal.

Immunocal is also loaded with branched chain amino acids, leucine, isoleucine, and valine (BCAA’s). During exercise, the body preferentially uses BCAA’s as a source of energy. Low levels of BCAA’s may lead to increased fatigue, especially during endurance events. There are more BCAA’s in Immunocal than in soy, egg, or any other protein you can pick up at the nutrition store. This is especially important for muscles to rejuvenate after exercise.

Glutathione, however, is what makes Immunocal especially important. Listed in the Physicians’ Desk Reference (PDR), a book that lists all the prescription products that can be written in the United States, Immunocal is categorized as a “glutathione precursor”. Why “precursor”? Because if you eat glutathione, it gets quickly digested and never makes it into you cells. The only way to raise your body’s glutathione levels is to eat the precursors or building blocks for your body to make glutathione on its own.

Dr. Gustavo Bounous, the “great-Grandfather” of natural glutathione precursor research, started looking at this in the late 1980’s. In his development of Immunocal, his intention was to effectively optimize immune function in immunocompromised people, including cancer patients, AIDS patients, and other severely ill people. By no coincidence, all these diseases are associated with muscle loss. Since those early days, over 80,000 articles have appeared in the medical literature. Needless to say, we now know vastly more about the functions of glutathione.

Look up glutathione in a medical book and you will read about functions such as protein synthesis and repair, enzyme regulation, and a host of other complicated actions. However, the majority of all of its functions can be summarized in the acronym “A.I.D.”: A: Antioxidant,I: Immune Optimizer, and D: Detoxifier.

Glutathione is referred to as the “master” antioxidant. This is quite a title to live up to. Glutathione has obtained this status because absolutely none of the antioxidants you’re now taking could function without the presence of glutathione. Glutathione recycles and recharges all the antioxidants in your cells. Given that athletes can use up to 20 times more oxygen while they’re working out compared to their couch-potato buddies, oxidative stress is a very real issue in sports medicine.

Glutathione is critical in order to develop a strong immune response. People with infections are going to burn through their glutathione quickly. The classic example is in HIV, where Immunocal has been patented to raise glutathione levels in patients. Translate this immune-enhancing ability to the gym and think of how many viral infections have upset your training routine. One thing that has clearly been shown through the years is that those of you who are going to push too hard in your training will experience a dip in your immune function. Too many potential gold medalists have fallen short because of this phenomenon.

One hazard that we encounter on a daily basis is our exposure to a toxic environment. It doesn’t matter how careful you are, there is inevitably going to be junk in the food we eat, the liquids we drink, and the air that we breathe that just shouldn’t be in your system. Raising glutathione is a strategy used in emergency departments to deal with certain overdoses to detoxify patients. What has emerged from the years of research is that glutathione is also responsible for the elimination of cigarette smoke, automobile exhaust, heavy metals like lead and mercury, pesticides, herbicides, and a long list of carcinogens that unfortunately make it into our cells. The highest levels of glutathione found in your body are in your liver which is, after all, your major organ of detoxification.

SHOW ME THE BEEF! An online search of articles on glutathione and exercise will bring up thousands of well-researched papers on the topic. Everything from muscle mass development, recovery from injury, decreased oxidative stress, and acidosis to increased performance. Dr. Larry Lands and his colleagues at McGill University in Montreal, Canada published a landmark study in sports physiology and glutathione. Using Immunocal, he was able to demonstrate not only a substantial rise in glutathione levels in exercising adults, but also a remarkable increase in strength and endurance of between 10 and 15%!

No wonder so many pros and serious elite athletes are taking advantage of this science. A healthy way to “beef” up your performance!