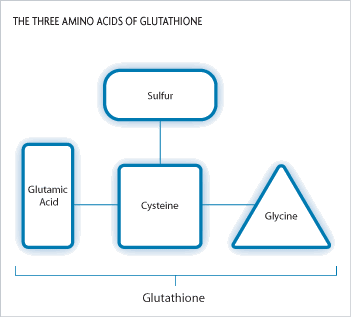 So what exactly is Glutathione?

Glutathione is a very simple molecule that is produced naturally all the time in your body. It is a combination of three simple building blocks of protein or amino acids — cysteine, glycine and glutamine.

Glutathione is the secret  to staying healthy and preventing aging, cancer, heart disease, dementia and more, and necessary to treat everything from autism to Alzheimer’s disease. It is the mother of all antioxidants, the master detoxifier and maestro of the immune system.

The secret of its power is the sulfur (SH) chemical groups it contains. Sulfur is a sticky, smelly molecule. It acts like fly paper and all the bad things in the body stick onto it, including free radicals and toxins like mercury and other heavy metals. Normally glutathione is recycled in the body, except when the toxic load becomes too great.

Antioxidants (the most well known of which are vitamins C and E) are important for good health because they neutralise free radicals, which can build up in cells and cause damage. Because glutathione exists within the cells, it is in a prime position to neutralise free radicals. It also has potentially widespread health benefits because it can be found in all types of cells, including the cells of the immune system, whose job is to fight disease.