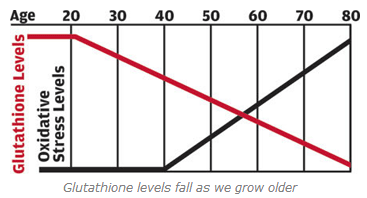 Glutathione is an essential component of your cells, with low glutathione levels, cells cannot perform many of their functions properly. Glutathione helps other antioxidants and nutrients do their jobs properly. Without it, no amount of supplementation or healthy eating will do us any good. In addition, since our immune system depends on this substance, a lack of it causes us to get sick more often.

Furthermore, this antioxidant helps our body get rid of toxins. This is important, because most of us are exposed to dangerous chemicals on a daily basis. In fact, a study by Cornell University found that over 60% of the world’s population is harmed by air pollution, and the Institute of Occupational Safety and Health recently found that almost 900 of the chemicals used in cosmetics and skincare products are toxic.

Glutathione is the body’s own health ‘AIDE’ – Antioxidant, Immune Booster, Detoxifier and Energiser. This small protein, produced naturally in the body, maintains these three crucial protective functions. In fact, your life depends upon it. Without glutathione, your cells would disintegrate from unrestrained oxidation, your body would have little resistance to bacteria, viruses and cancer, and your liver would cease functioning from the accumulation of toxins. Glutathione functions in dozens of other roles in our metabolism, however the major functions can be summarised in four areas:

Advances in the study of antioxidants have grown to the point that a whole new branch of medicine has developed called “Free Radical Biology” which focuses on oxidant/antioxidant balance. These scientists have elaborated upon several hundred different disease processes where antioxidants play a vital role. The shelves of natural food stores and pharmacies are resplendent with a large array of different antioxidants offered. However, although these antioxidants including vitamin C and vitamin E are “natural”, they are not natural to your body. If you do not ingest these vitamins, they will not be found in your cells naturally. Given the importance of antioxidation in hundreds of different disease processes, one poses the question – “What antioxidant does the body manufacture to ward off these processes?” Glutathione is the most abundantly produced antioxidant in the body. In fact, the presence of this ubiquitous small protein is crucial for the functioning of any of the other antioxidants we know of.

GLUTATHIONE – “FUEL FOR THE IMMUNE SYSTEM”

Our immune systems depend on a steady supply of glutathione. Without it, our immune defenses become weakened. Your immune system is constantly on the prowl for pathogens and foreign antigens—agents of cellular damage, toxicity and disease. These antigens include viruses, bacteria, parasites, fungi and even pre-cancerous cells. To neutralize these pathogens the body needs a ready supply of glutathione. If it doesn’t have enough, some of the invaders will get through, infecting the body and/or contributing to aging, long-term accumulative damage—even eventual cancer. We can’t avoid illness and aging altogether—although a few scientists are pursuing some age-old dreams—but by keeping our intracellular glutathione levels up we also keep our immune system on full alert and fully armed. Dr. Gustavo Bounous, a leading glutathione expert, concurs that glutathione is fuel for the immune system. “ The limiting factor for the proper activity and multiplication of our lymphocytes (white blood cells) is the availability of glutathione”. Dr. Bounous’ research at McGill University has culminated in the development of a nutritional supplement called “Immunocal” which raises glutathione levels.

Hundreds of toxins are eliminated by the GSH enzyme system, including drug metabolites, pollutants, carcinogens and radiation damage. It’s no surprise that GSH concentrations are highest in the liver, the body’s major detoxifying organ. We inhale and ingest natural and synthetic toxins every day of our lives and can’t possibly avoid them, especially in our technological times, our congested and polluted cities and with our bio-engineered food supplies. Experimental studies have shown that low glutathione levels lead to poor liver and kidney function, and result in unnecessarily large quantities of toxins circulating through the body. There, they continuously damage individual cells and organs. The list of toxins eliminated include cigarette smoke, automobile exhaust and heavy metals. Physicians regularly use drugs to elevate glutathione levels in critical illnesses like acetaminophen overdose and fulminant hepatic failure.

GLUTATHIONE – “OUR BODY’S VERY OWN ENERGISER”

Glutathione also plays critical roles in the mitochondria for energy production. Hence it is necessary for proper oxygen utilisation, muscular strength, and has been found helpful in many energy deficit states like chronic fatigue syndrome, and neurodegenerative conditions, most notably Parkinson’s disease. When our cells produce energy, there is oxidative damage to the cells and it plays a dual role of allowing better energy production and efficient cellular detoxification for optimal cellular health.

Although glutathione is produced naturally in the body, its levels begin to decline at around twenty years of age. From that point, they decrease by 8% to 12% every decade. By the time a person is 50, these levels are only at 60% to 70% of what they were in their teens. There is a constant demand for glutathione in our daily life; stress, pollution and infectious disease are all causes of glutathione depletion.

For those that exercise regularly, glutathione is especially important to replenish to avoid injury, improve recovery time and keep your immune system strong. Because it is nearly impossible to avoid these things with our modern lifestyle, most people do not have enough glutathione in their bodies.

The Importance of Glutathione in Protecting Against Chronic Illness 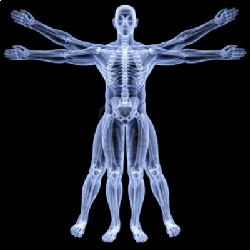 Many disease states are characterised by low glutathione levels. Immunocal has been developed as a strategy to help sustain glutathione levels. Glutathione deficiency states include, but are not limited to: AIDS and cancer muscle wasting, chemical and infectious hepatitis, radiation poisoning, malnutrition states, strong physical stress, and acetaminophen toxicity.

Many other problems including cardiovascular, lung, digestive and kidney disorders are associated with glutathione deficiency and are cited in numerous medical references. If you are sick or old or are just not in peak shape, you likely have glutathione deficiency. In fact, the top British medical journal, the Lancet, found the highest glutathione levels in healthy young people, lower levels in healthy elderly, lower still in sick elderly and the lowest of all in the hospitalized elderly.

If you would like to find out the roles of Glutathione in our body, click HERE, you will be amazed! 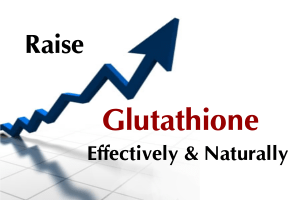