The Discovery of Immunocal:

The most important discovery, since penicillin!? 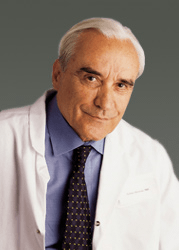 A discovery in 1978 at McGill University, Montreal, Canada is changing the world.

Dr. Gustavo Bounous and his team of scientists at the immunology department, discovered a natural food source that dramatically increased the levels of glutathione in animal tissues and organs.

The science and experiments investigated different types of proteins being compared to one another. The research revealed that one of these proteins had a profound effect on the immune systems of the animals they were testing with. The science leading up to this discovery and that which still continues to this day is making a major impact on the lives of more and more people each day. The protein that the science of Dr. Bounous and his team discovered, now has the proprietary name – Immunocal®.

Immunocal® has been scientifically proven and patented
with a “Method of Use Patent” to improve the human immune system.
Patent #5,230,902

The Discovery of Immunocal®:

Dr. Bounous and his staff at the McGill University Immunology Department were investigating the differing effects of various protein food sources after exposure to chemically induced colon cancer.

1. Various groups of white mice were each being fed a different type of protein, while being injected with a chemical that caused colon cancer 100% of the time.

2. After 4 weeks, each group of mice was dissected and the research science was showing the colon cancer had metastasized and spread throughout the body.

3. Dr. Bounous received a box of a “whey” that was being dumped in the rivers of France. The hope was that the science being conducted would find a useful solution to an environmental problem. Disposing of the useless bi-product of the cheese making process, which is “whey protein”, was polluting the water.

4. Further science continued and this time, the mice, under the same conditions and testing parameters, were fed the “whey protein”

5. When this group of mice were dissected, much to the surprise of Dr. Bounous and his staff, the cancer did not metastasize and in fact remained in the colon as healthy pink tumors, indicating that this protein source inhibited the growth of the cancer.

This was the original discovery, but the road of science ahead was not paved so perfectly and as good science goes, the experiments had to continue, to reproduce the successful results over and over again through real, validated, documented, medical science…

As a few years passed, the success continued until a point that the positive result ABRUPTLY STOPPED!!!

For a 2 or 3 year time frame, Dr. Bounous and his staff COULD NOT reproduce the result and they had no idea why this had occurred. Experiment after experiment was resulting in the same unsuccessful outcome.

The EUREKA moment occurred one evening, while Dr. Bounous was at home, watching a cooking show on the television. During the program, the chef indicated that the recipe he was preparing had recently changed in it’s taste because of new laws that had been implemented. The new law required that the milk and cheese making process be changed to reduce levels of bacteria from the raw milk sources – THEY CHANGED THE PASTEURIZATION TEMPERATURE!!!

Dr. Bounous returned to the lab the next day and began preparations to produce their own “whey protein isolate” from their own raw milk source. It was pasteurized at a lower temperature and VOILA, the experiments began to produce that same cancer inhibiting effect.

When it came time to share this amazing science and product with the world, a business was formed and the whey formulation was given a name.

THIS WAS THE BIRTH OF Immunocal®!!

The following video will help you clearly understand the importance of glutathione for your body and how Immunocal® is your best choice for a safe, proven, effective, patented and highly documented natural source of what your body needs to optimize your intracellular glutathione levels.